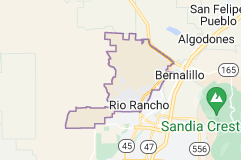 Rio Rancho is the largest city and economic hub of Sandoval County in the U.S. state of New Mexico. A small portion of the city extends into northern Bernalillo County. It is the third-largest and also one of the fastest expanding cities in New Mexico. As of the 2010 census, Rio Rancho had a population of 93,820.